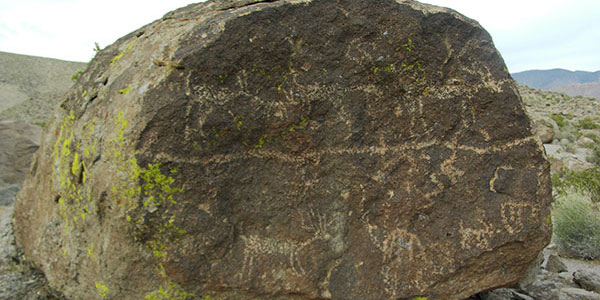 The petroglyphs found at Ash Springs Rock Art Site are typical of much the Great Basin rock art. All petroglyphs at Ash Springs are pecked and display a wide range of line widths. This rock art adorns surfaces that have been subject to weathering and some marked human defacement. Pictographs, or painted rock art, and cupules, or pit-and-groove rock art, are both absent from this site but can be observed at other Lincoln County sites.

This area is known to have been a winter site for the Pahranagats, and might have accommodated a small village of 25-40 individuals. Winter was the most permanent phase of the seasons for these people, and was spent in villages, usually around the lower fringes of the pinyon-juniper forests at an altitude of 5000-8000 ft. Although Ash Springs is not in this type of area, and is at a much lower altitude of 3600-3800 ft., the boulders at this site sheltered people from the cold. Water was ordinarily obtained from snow meltoff, however, the constant availability of warm water at Ash Springs rendered this unnecessary and made this site extremely desirable.

In general, less food gathering took place during the winter months, although there was occasional hunting. Winter was mostly a time of visiting, gambling, tool making and story telling. The presence of debitage, or stone flakes, indicate that many stone tools were created here. These include knives, drills, scrapers, hammerstones, and a variety of projectile points. Tools were fashioned mostly out of cherts which were obtained locally, and obsidians, which came from farther away in Utah. The Pahranagats also had a highly specialized basketry tradition. Baskets specifically fashioned to gather and process plant foods included burden baskets, winnowing and parching trays, bowls, and seed beaters. By contrast, pottery was simple and utilitarian, although some vessels had cord-impressed or fingernail-incised decorations. At the Ash Springs Site, sherds of Fremont-like greyware have also been found, indicating the presence of these Southwestern groups who co-existed in this area along with the Pahranagats c. AD 500-1250.

The entrance to Ash Springs Rock Art Site is approximately 5.0 miles south from the intersection of State Route 375, State Route 318 and U.S. Route 93 (the “Y”). Traveling south on U.S. Route 93 towards Alamo, it’s on the left (east) side of the road . Take the dirt road to the barbed wire gate, approximately .2 miles from the highway entrance. A yellow BLM marker is just to the right of the gate. Continue to the register.