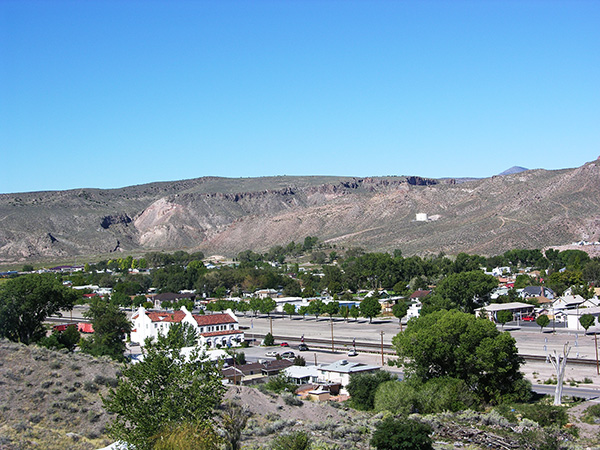 Located in southeastern Nevada, the quiet town of Caliente is the only incorporated community in Lincoln County. Shaded by beautiful cottonwood trees, the residential area has a friendly hometown feel.

Evidence of the historical roots of this railroad town can be seen in its mission-style Caliente Railroad station. City offices, a library and a unique mural in the old Amtrak waiting room now occupy the railroad depot. A picturesque line of “company row” houses are located just northeast of downtown. Town services include restaurants, gas stations, motels, a small casino and a variety of stores. The U.S. Department of the Interior-Bureau of Land Management offers visitor information for travelers.

For sports and recreation there are three city parks, a public swimming pool, tennis courts, rodeo grounds, shooting range, and motocross race track. Hometown activities include barbecues, softball tournaments, homecoming reunions and the Fourth of July Celebration – drawing visitors from all over with great food, dancing, games for the kids and a dazzling fireworks display.

Caliente is conveniently located within some of the most beautiful country in the state. To the south is magnificent Rainbow Canyon, with the oasis-like setting of Kershaw-Ryan State Park just two miles south of the city center. Within 50 miles of the town are four other state parks: Beaver Dam, Cathedral Gorge, Spring Valley, and Echo Canyon.

The meadow area around the junction of Meadow Valley Wash and Clover Creek was originally settled in the early 1860’s by Ike and Dow Barton, two Negro slaves who had escaped from Arkansas. In the early 1870’s the area was known as Dutch Flat, with Jackman Ranch being established. In 1874, ranchers Charles and William Culverwell purchased the Jackman Ranch and renamed it as Culverwell Ranch. It was later referred to as “Culverwell.” Along with ranching, the family earned a living by providing hay for the mining camps in Pioche and Delamar.

A dispute between two major railroad companies began when E.H. Harriman of the Oregon Short Line and Union Pacific, pushed track from Utah to the site of Culverwell. Even as Harriman’s crews worked on the line, the newly formed San Pedro, Los Angeles and Salt Lake Railroad owned by Senator William Clark, claimed the same territory. These rival groups had sought the right-of-way in a canyon only big enough only for a single set of tracks. The Union Pacific had grade stakes set all the way into Culverwell and on toward Pioche, but their rival group gobbled up enough of the narrow canyon to set a road block in the path of Union Pacific.

In 1901 William Culverwell ended the Harriman-Clark battle with his shotgun. As owner of the land, Culverwell allowed one railroad grade to be built through his property. The two factions eventually reconciled, Union Pacific assumed control of the project. Culverwell became “Calientes” (the Spanish word for hot) after the hot springs found in a cave at the base of the surrounding mountains. The town was surveyed, and on August 3, 1901, a post office opened and postal officials renamed the town Caliente, dropping the ‘s’. The railroad line was completed in 1905, and by 1910, Caliente was the largest town in Lincoln County with 1,755 residents.

A two-story wooden structure served as a train depot until burning down in one of Caliente’s disastrous fires. In 1923, the impressive Caliente Train Depot was built, a classic Mission-style building constructed of tan stucco. This two-story building included the railroad station, private offices and a community center on the first floor, while the second level featured a hotel.

Within a few years, Caliente grew to more than 5,000 residents. For more than 40 years, Caliente was one of the major division points on the railroad line. When steam engines were replaced by diesel locomotives in the 1940’s, the division point moved to Las Vegas. Without the depot as a main railroad stop, the town’s growth dwindled but not its spirit.

A town steeped in history, Caliente has many stories to tell and was one of the favorite writing spots for western novelist Zane Grey.