Find the Alien and his space ship before he takes off for planets unknown. 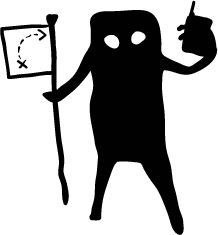 Know Before You Go

There are over 4300 geocaches in Lincoln County, Nevada. Some of these are located in or around state parks, native american rock art sites, ghost towns and other historic areas. Please practice Tread Lightly and Leave No Trace techniques and respect private property owners. Although this is very scenic country, it is also very remote so make sure you are well prepared and follow the safety and travel tips. Have fun geocaching in Lincoln County!

Geocaching is an outdoor activity that most often involves the use of a Global Positioning System” (“GPS”) receiver or traditional navigational techniques to find a “geocache” (or “cache”) placed anywhere in the world. A typical cache is a small, waterproof container containing a logbook and “treasure”, usually trinkets of little value. Participants are called geocachers. Geocaching is similar to a much older activity called “Letterboxing”. The major difference is its use of the “Global Positioning System” and the Internet.

Geocaching was made possible by the “turning off” of the selective availability of the Global Positioning System on May 1, 2000. The first documented placement of a cache with GPS assistance took place on May 3, 2000 and the location was posted on the Usenet newsgroup. By May 6, 2000, it had been found twice and logged once. Today, well over 200,000 geocaches are placed in 220 countries around the world, and are registered on various Web sites devoted to geocaching.

For the traditional geocache, a geocacher will place a waterproof container, containing a log book (with pen or pencil) and treasures, then note the cache’s latitude and longitude coordinates. These coordinates, along with other details of the location, are posted online. Other geocachers obtain the coordinates from the Internet and using handheld GPS receivers, seek out the cache. The finding geocachers record their exploits in the logbook and online. Geocachers are free to take objects from the cache in exchange for leaving something of similar or higher value, so there’s a treasure for the next person to find.

Typical cache treasures aren’t high in intrinsic value. Aside from the logbook, common cache contents are two dollar bills or other unusual coins or currency; small toys; ornamental buttons; and CDs or books. Also common are “hitchhikers” (a.k.a. travelers or Travel Bugs), which are objects moved from cache to cache, and whose travels may be logged online. Occasionally, higher value items are included in geocaches, normally reserved for the “first finder”, or those locations which are harder to reach.

Geocaches can range in size from “microcaches”, too small to hold anything more than a tiny paper log, to those placed in five-gallon buckets or even larger containers. If a geocache has been vandalized or stolen, it is said to have been “plundered” or “muggled”. The latter term plays off the fact that those not familiar with geocaching are called “geo-muggles” or just muggles, a term borrowed from the Harry Potter series of books. If a cacher discovers that a cache has been muggled, an e-mail

There are many types of caches. Some are easy enough to be called “drive-bys”, “park ‘n’ grabs”, or “cache and dash”. Others are very difficult.

A basic cache. Contains one container with a log book at minimum, usually toys.

Requires a visit to one or more intermediate points to determine the coordinates of the cache.

Coordinates listed are not the coordinates for the cache. The seeker must solve a puzzle to find the actual coordinates.

A meeting for geocachers, found by calendar date, hour and Latitude and longitude coordinates

A variation on the event cache, where geocachers get together at a particular location and clean up the trash in the area. Click here for more information.

This is a hybrid between geocaching and the much older activity of letter boxing. In addition to a logbook and trade items, it contains a rubber stamp to stamp your log book. Letter boxers carry their own stamp with them, to stamp the letterbox’s log book.

A location with a public web cam. You must have someone watching the camera on a computer to “capture” your image, or you can bring your own lap-top with you.

A location to visit simply for what is already there. To prove you visited the site, you are generally required to either email the cache owner with information such as a date or a name on a plaque, or post a picture of yourself at the site with GPS receiver in hand.

The opposite of a traditional cache, as the game is to find a specific type of object, like a one-room schoolhouse, then log its coordinates and post a picture holding your GPS in front of the cache site.

A type of “cache-less cache” sponsored and approved by the Geological Society of America. The locations do not have items, but contain information about the geology, fossils and local environment.

The finder logs the cache, trades trinkets, then hides the cache in a different place. Geocaching.com, currently the most popular caching Web site, no longer lists caches without a physical object, including locationless/reverse, virtual, webcam, and earth caches (however, existing virtual, webcam, and earth caches have been grandfathered in and “finds” to them can still be logged at the site). Groundspeak, Inc., the site’s owners, have created a waymarking website, at waymarking.com, to handle non-physical object caches.

There are a number of Web sites that list geocache sites around the world. The best known is www.geocaching.com which dates from 2000