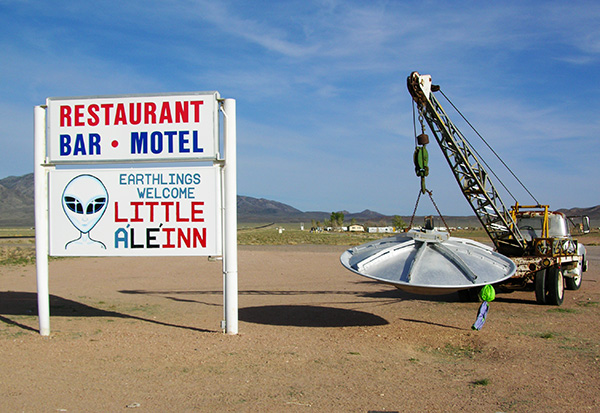 Originally called “Sandy” because of its long expanse of sand, Rachel is the youngest town in Nevada and is considered the”UFO Capital of the World.” The town was named after Rachel Jones, the first child born in the community founded by D.C. Day in 1978. The community has been featured in magazines, books, television shows and many major newspapers as the center of UFO activity, drawing Sci-Fi fans and visitors from all over the world. The result of this publicity was the renaming of Highway 375 as “The Extraterrestrial Highway” by the Nevada State Legislature. For the inquisitive, part of the Nevada Test Site is situated in southwestern Lincoln County, close to Rachel. However, for obvious reasons, there are no guided tours and warning signs are posted for visitors who get a little too curious.

With only about one hundred people in the entire valley, Rachel does not even have a post office. There is, however, a gas station/convenience store at one end of town, a restaurant/bar/motel at the other, and an RV park. Although there are least five permanent houses, most people live in mobile homes on patches of scrub desert. The town is located at the southern end of the Sand Springs Valley, an otherwise empty, bowl-shaped valley about twenty-five miles wide.

In and around this little town, alfalfa is grown and cattle raised. Western history buffs may want to explore the mountains surrounding Rachel. Paiute Indian artifacts such as arrowheads, petroglyphs and other signs of encampments can be found. Not far from Rachel are said to be ghost towns full of spirits of deceased cowboys. Inquire locally for directions – the friendly folks at Rachel invite everyone to explore their town and the surrounding area.

This region was the occasional home of the Piute Indians from which Tempiute Mountain was named after. The first white settlements in the area were mining camps that came and went in a boom-and-bust cycle. Within a thirty-mile radius of Rachel are the remnants of dozens of abandoned mines along withseveral fairly long-term mining camps including Logan, Crescent, Freiburg and Groom. Silver, tungsten, mercury and lead were once mined from these locations.

Rachel was a mining town whose fortunes has risen and fallen with that of the Union Carbide tungsten mine on Tempiute Mountain about five miles east of town. When Union Carbide bought the mine and reopened it in the mid-1970s, there was an immediate need for housing for the more than one-hundred workers and their families. The site possessed the two essential requirements for settlement: accessible underground water and private land. When Union Carbide closed the mine around 1988, the fortunes of Rachel fell with it. At least half of the population moved out, leaving behind many empty mobile home pads and a few hardy survivors.

In November 1989, a Las Vegas resident, Bob Lazar, claimed on a Las Vegas television station that he had worked with alien spacecraft at Papoose Lake, in the Nellis Range about thirty-five miles south of Rachel. He said that he saw nine flying saucers in a hanger built into a hillside, and that he had worked as a scientist to “reverse engineer” the propulsion system of one of these craft. As soon as his claims were publicized, arush of curious UFO seekers traveled to the Tikaboo Valley to look for UFOs. The sacred site among UFO watchers was the “Black Mailbox,” the mailbox of a local rancher. Some who ventured further down the highway came upon the Rachel Bar and Grill that was later re-named the Little A’Le’Inn (pronounced “Little Alien”).

Most sightings center on “Area 51,” the secret aircraft testing facility at Groom Lake, about twenty-five miles south of Rachel. This large Air Force base, which the government tries to keep secret, was the testing ground for the U-2, A-12 and F-117A before these planes were made public. Lazar never claimed there were saucers at Groom Lake, only in the valley to the south, but Area 51 was easier for UFO buffs to focus on than Lazar’s ambiguous location.

Media who have featured stories on the area include The Wall Street Journal, Popular Science,The New York Times, ABC News, CNN, Encounters and Sightings. On Oct. 1, 1994, Larry King brought a crew of 50 to Rachel for a live 2-hour special on TNT. They built an open-air set in the desert across the highway from the bar, employed at least six television cameras and conducted the show as the sun went down as millions around the country watched.

For more information on Rachel and its “out-of -this-world” reputation, please visit dreamlandresort.com.